TAAT Global Alternatives (CSE:TAAT) (OTCQB:TOBAF) is known as the industry leader of smokable hemp-based cigarettes, which offer an experience and taste that is strikingly comparable to the real thing. And as its core business matures, TAAT has acquired another asset which will help it expand its distribution in the Great Lakes region of the United States.

On February 28, the company entered into an agreement to acquire HLND Holdings, Inc., which will fortify TAAT’s presence in Ohio and beyond. With a network of more than 5,000 convenience stores in the buckeye state, HLND operates a long-established convenience distribution network in categories to include tobacco, snacks, candy, and various other convenience products. Furthermore, the deal will give TAAT a regional fulfillment centre to allow it to distribute its products more efficiently and profitably. 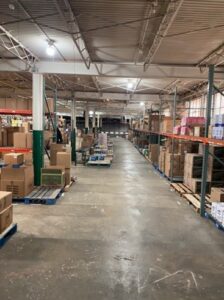 The prospective deal to acquire HLND Holdings will also give TAAT a discernable boost to its top line. SInce 2019, HLND’s net year-over-year revenues have grown at least double digits on a percentage basis—including 30.65% revenue growth in 2020. While we can’t assess the acquiree’s net profitability as its financial statements are not accessible as a private company, TAAT characterized HLND Holdings as “profitable” in the press release describing the deal.

With 81% of the purchase price of US$5,200,000, along with the assumption of US$1,800,000 debt outstanding, coming by way of TAAT common share equity,the deal should not put undo pressure on TAAT’s balance sheet. Is it the type of acquisition which should generate cash flow and improve margins once TAAT is able to control its own wholesale distribution channel direct to the retailer.

It’s a tried & true formula: cut out the middleman and margin capture becomes possible. In this case, TAAT becomes both producer and wholesaler, which gives it significant leverage and influence with its last-mile channel partners.

As mentioned at the outset, TAAT Global Alternatives is known for its leading line of hemp-based cigarettes. Its stated goal is to position itself as a primary nicotine-free alternative in the $814 billion global tobacco industry. At present, the company does not list any ancillary products on its website, nor does it reference non-core products in its public filings. While TAAT has a popular and fast-growing product, its product portfolio is monolithic and exclusively focused on becoming a tobacco-free surrogate provider. However, CEO Setti Coscarella provided clues that this may be changing.

Again, we reference the verbiage used in the press release announcing the acquisition of HLND Holdings.In it, Mr, Coscarella states that,”Additionally, with direct access to Ohio stores through HLND we can test new offerings and initiatives… where we anticipate they will be invaluable to us for growing our distribution, developing new products, and formulating strategies for commercializing TAAT on an even larger scale.”

While Mr, Coscarella doesn’t explicitly state which type of new products and offerings are contemplated, the HLND acquisition would give the company easier access to develop, test and introduce new product offerings into consumer channels given the direct interaction with last-mile retailers. And introducing ancillary products makes a lot of sense given that it’s almost impossible to sustain long term growth as a one-product company—even if that product is wildly successful.

Indeed, TAAT has recently begun the process of broadening out its product portfolio by recently entering into a letter of intent with a U.S. subsidiary of Shanghai Shunho New Materials Technology Co. to undertake development for a white-labeled “heat-not-burn” device and heatable sticks containing TAAT’s proprietary tobacco-free and nicotine-free Beyond Tobacco material.

Heat-not-burn products—also known as heated tobacco products—are essentially vaporizers which generate a flavorful nicotine-containing vapor without combusting the base material. This type of device is particularly popular with younger and health-conscious demographics which are increasingly shunning harmful combustion-based inhalation methods.

The strategy to diversify into smoke-free alternatives is something all of TAAT’s Big Tobacco competitors have long since undertaken. For example, Marlboro cigarette maker Altria Group’s portfolio consists of four distinct smoke-free platforms—although they are mostly geared toward nicotine delivery. Just over three years ago, Altria famously invested $12.8 billion by acquiring a 35% stake in Juul, as it looked to expand beyond traditional cigarettes.

While developing novel smokeless and nicotine-free products is a given as TAAT aims to siphon market share away from Big Tobacco, HLND Holdings is a potential segue into new product offerings altogether. In whatever form that takes shape is unclear, however the acquisition has granted the company additional optionality to leverage the convenience store channel in a way that was unattainable before. As TAAT matures into a full-fledged tobacco alternative linchpin, the company has taken an evolutionary step in the product portfolio diversification process. 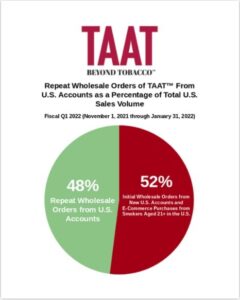 TAAT has grown its store count to more than 2,000 stores in the United States alone

Given TAAT’s success with its inaugural smokable hemp-based cigarette line, we’re excited to see what the future has in store.