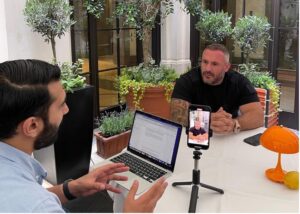 Joseph Ashford is the owner of K4 Global, a dynamic firm based in Bournemouth that’s been remarkably effective at boosting the profile of its clients. Focusing on growth and industry position, K4 has a handle on the markets and what it takes to really make it a competitive landscape. Ashford has faced a lot of personal and professional challenges in his life, and he recently shared some of the primary factors that shaped his success.

The Road to K4 Global

Joseph Ashford started off his professional career learning the art of buying and selling (mostly vehicles). When the economy took a hit around 2007, he was quick to pivot to stay afloat. Working with his father as a plumber, he learned a trade that was recession-proof, even if it was a job he ultimately didn’t enjoy. Even as he tried to get back into buying and selling cars, which is ultimately what he wanted to do, he kept getting pulled back to more tangible tasks like construction.

He built his own construction company and began buying and selling land instead of cars. After purchasing at a low point in the market and selling when the market started to swing back again, he got the same taste of trading strategy that he had before his diversion.

Wherever he could see a margin, whether that was commercial property or an emerging business, he made swift decisions. His instinct and acumen allowed him to build his fortune to the point where he wanted more. He started to see that there was something more to all of this, especially when people started reaching out to him for his help in managing their own business affairs.

Like many true entrepreneurs, Joseph Ashford talks a lot about what it means to him to keep moving forward, even in the face of defeat. When you work in a variety of sectors, the reality is that you need to know both the strengths and disadvantages of each one. Ashford has had to be about as versatile as a professional can get. “The biggest thing that I learned, and it taught me through all of this is, never to give up. It’s good to have a dream. Focus on your dream and it’s also good to understand that it’s not just a straight river getting there.”

Even if most entrepreneurs have a similar attitude to getting things done, not all of them can claim to have the same attitude toward how they treat other people. Ashford says that there are some people out there who might describe him as ruthless. However, he says that this judgment doesn’t hold water if you look a little deeper. When asked what contributed to his success, he’s adamant that “the best, most successful business deals or ventures I’ve had, have started with a clean, kind heart.”

Caring about other people doesn’t start with his clients, though. It starts with his staff. He credits a lot of what he’s managed to accomplish to the hard work of his team. It’s not always easy to achieve that kind of loyalty, but he’s managed to hire people who are ready to commit to a cause — and not just for the sake of their salary.

Ashford may have wanted to make money in his career, but he also didn’t want it to be the primary fuel for the fire. For him, enjoying his life in Bournemouth meant having a good time as well as building his wealth. So, if he happened to run across an idea or business that he believed in, even if the profit margins weren’t as stark as he’d like them to be, he took the opportunity anyway.

As he put it, “I had a slightly different view that if I liked it and I liked the people, I liked the idea and I fancied having a go and it was all my own money, I’d have a go.” Clients of K4 Global in Bournemouth would agree with this. The level of customer service that they receive is unlike anything they’ve experienced before.

For the staff to go above and beyond like that, they have to be helped by a professional who understands the true value of what’s on the table. The trajectory of Ashford’s life has trained him to quickly hone in on what matters, so he doesn’t waste time on the fluff. It may not have been an easy journey, but he wouldn’t have it any other way.