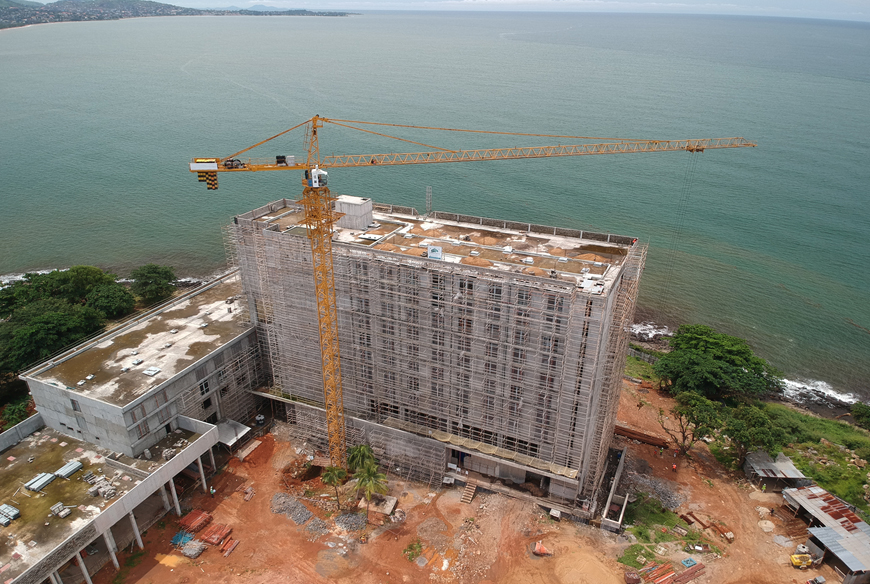 In the nebulous world of international construction and infrastructure project allocation, the old catchphrase “It’s not what you know, it’s who you know” rings true. While both elements are important as contractor conglomerates joust for multi-million dollar projects in developing countries annually, it’s often relationships that define which bidders end up on top. Fortunately for Minaean SP Construction Corp., they have seemingly fomented the necessary liaisons to advance their negotiation pipeline to the next level.

On the contractor side, its strategic partnership with Shapoorji Pallonji International (SPINT)—the subsidiary of Shapoorji Pallonji Group (SPG)—gives Minaean major public infrastructure project credibility that sovereign governments appreciate. Having operated for over 155 years and completed dozens of large-scale projects across all continents, SPG is one of India’s largest construction firms with annual revenue exceeding US$ 7 billion.

On the business development side, SPG’s ability to secure contracts is well defined by using its invaluable network in the Canadian market. Its global contracts are developed and executed through the support of Canadian crown corporations such as Canadian Trade Commissioners Services (TCS), Canadian Commercial Corp. (CCC), Export Development Canada (EDC) and other export credit agencies. These are the critical quasi-governmental agencies which forge the necessary inroads to open up the tendering process to preferred bidders—often as sole-sourced contracts.

Sole-sourced contracts are often awarded to select companies bidding for infrastructure projects in developing nations deemed to provide an ideal service in a particular geography. The benefactor establishes a foothold within government authorities by way of deemed expertise and cemented by established relationships with mutual stakeholders. Sole-sourced contracts generally carry much higher win rates compared to competitive tendering processes, as the monopolistic process steers the contract tender to the benefactor party. Through its aforementioned connections, Minaean has maneuvered itself into an ideal bidding position.

On the execution side, Minaean should be well-equipped to deliver any project coming its way. It is known for its pioneering efforts in the manufacture and fabrication of light gauge steel (LGS) structural wall panels for four-to-six storey buildings and modular metal buildings in North America and India. The strong, affordable, ecologically sustainable structures provided a solution to the mass housing shortages in developing countries. Historically, over 500 modular buildings and 20 projects using its proprietary LGS System have been executed.

Backed by the expertise of a global conglomerate infrastructure developer and networking of quasi-governmental developed nation institutions, Minaean appears to be making headway in its attempts to win international business. Its consortium-style business structure with SPINT offers opportunities for infrastructure related contracts in multiple sectors on a Government to Government negotiation basis.

Minaean SP Construction: Are Contracts Just Around The Corner?

Although Minaean’s news cycle had been dormant for an extended period prior to 2021, it has come to life in recent times, giving investors a tantalizing glimpse into what could be.

On April 7th, Minaean SP Construction released an update on the development and construction of a college hospital in Zambia, Africa. Through this update, Minaean has communicated the status of this project and the financing prospects. The Memorandum of Understanding which was signed two years back with the Ministry of Health has been extended. Minaean is working on submitting the preliminary proposal which will be done as soon as the Government of Zambia has completed its debt restructuring, currently in progress with International Monetary Fund (IMF). Based on the current indication and estimation the budgeted construction cost is expected to be US$170 million (to be detrmined by final feasibility studies).

The Project, involving design, finance and construction of a 300 bed tertiary hospital with teaching facilities,  will be constructed in Lusaka, Zambia’s capital. It also involved the reconstruction and expansion of the trauma hospital at the same location which is on 22 hectares of government property, 12 kms from the central business district of Lusaka.  Interestingly, SPG is known for its expertise in construction of hospitals with 45 such projects completed with a total capacity exceeding 19,000 beds.

And on March 25, Minaean provided a corporate update in which it disclosed itself to have “several” large scale projects potentially upcoming. These include nine projects under development in nine countries that are in the pipeline. The near term projects include potential contracts in Uganda, Cote D’Ivoire and Zambia. In Uganda, construction of an industrial park in the region called Kessesse is under negotiation.

All told, Minaean has delivered four press releases since March 25, 2021 after having not disseminated anything for the previous five years. In combination with the material increase in the volume of trading in the company’s common shares during this time, some might infer that Minaean could be drawing closer to snagging one, or more, of these lucrative deals.

Investors often bandy around the term “priced in”, which is to say the market, as a forward-looking discounting mechanism, generally affords individual securities a fair valuation based on the medium term prospects of a company. In Minaean’s case, this may not be true.  With an aggregate market capitalization of just C$14.6 million as of May 27, the market appears to be sleeping on the company’s ability to get things done.

To give a basic idea of the revenue potential involved, Minaean lists ten projects on its investor deck under its “Short and Long Term Prospects” list which have an aggregate contract value of just under US$2 billion. Although the entire contract value would not be booked by Minaean directly, Canadian regulations stipulate that a minimum of 30% of project revenues must come back into the Canadian entity’s coffers.

As the Canadian subsidiary of SPINT, Minaean would book its fair share of public works revenue on the top line. Due to its lean cost structure which only increases once projects get underway, the company would likely be generating positive cash flow on any significant contract it receives. The more contracts it books, the bigger the boost to the top and bottom lines.

Furthermore, Minaean’s capital structure is about as simplistic as it gets. The company has 58,199,883 common shares issued & outstanding and only 5,534,116 options granted. In small cap terms, the float is “tight” and conducive for movement during periods of material news flow.

Ultimately, Minaean’s investment thesis is an easy one for investors to understand. Its intrinsic value—which some might argue is quite low at today’s prices—is tied to its ability to win big scale international public works projects. Over the years, it has fomented relationships with one on India’s largest contractor conglomerates and Canadian quasi-governmental agencies to put it in position to win sole-sourced and government to government contracts. If Minaean is able to do so, its share price should benefit commensurately with the amount of business it is able to generate.

There are no complicated capital structure costs, impairments, debt overhangs or convoluted cap tables to maneuver through. Just its ability to win business in an arena where the privileged and connected few usually succeed.

INTERVIEW: Workhuman CEO Eric Mosley Talks About What It Takes to Become a Unicorn

Dynatrace’s Maciag on Application Portfolios Shifting to the Cloud