Today, the company reported a new contract with QVC Italia SRL to exclusively deploy OOOOO’s proprietary technology and platform to help QVC to innovate its shopping experiences across its network. The contract is applicable for 12 months and will include work on streaming applications, marketing, and other initiatives.

Most importantly, Qurate Retail Group (QRG) reaches more than 200 million homes worldwide via 14 television networks and millions more on various online channels. OOOOO Entertainment will be instrumental in the buildout of QRG’s online shopping streaming services, which will pave the way for how the next generation of young shoppers engage commerce.

This is the type of scale potential the medium can generate for existing retail chains and franchise conglomerates. With the worldwide buildout of 5G networks better supporting the shoppable video experience—and with young consumers conditioned to spend more time interacting with their phone rather than live people—the shift is inevitable.

Although still in its infancy, OOOOO Entertainment is seeking to become North America’s version of Pinduoduo Inc. (PDD: NASDAQ). Founded in 2015, Pinduoduo has become China’s leading shoppable video company with a market cap of approximately $70 billion.

While OOOOO Entertainment faces the typical startup headwinds of under-developed consumer end-user demand, Pinduoduo provides a real-life precedent for how fast first movers can ascend if they meet the technological and consumer demands of the industry. As one of North America’s only pure-play interactive shoppable platforms, OOOOO has a ground floor opportunity to foster a parallel growth model that has flourished in the East.

If we discount COVID and associated barriers making physical shopping more difficult, the engagement statistics between social and traditional media point towards a structural shift towards interactive shopping. Simply put, consumers are spending more time engaging in social media rather than traditional media, which lends itself perfectly towards the influencer selling model. 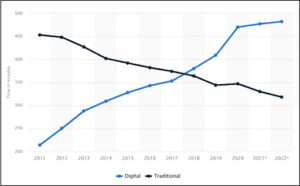 According to Statista, higher online media consumption in the United States (2020) was partially attributed to the coronavirus outbreak—although daily time with traditional media such as television, radio, newspapers and magazines declined. Looking ahead to next year, the average daily time spent with digital media in the United States is expected to increase from 470 minutes (seven hours, 50 minutes) in 2020 to just under eight hours in 2022.

Keep in mind, this is all coming at a time when consumers are more skeptical of Big Media than ever before.

According to Gallop, Americans’ trust in the media to report the news fully, accurately and fairly has declined four percentage points since 2020 to 36%—the second lowest reading ever in Gallup’s trend. Furthermore, only 7% of U.S. adults say they have “a great deal” and 29% “a fair amount” of trust and confidence in traditional media, in which most retail advertising dollars are still spent. These trends portend badly for advertisers, as consumers engage less with media 1.0, which ultimately means less eyeballs on them. This is reflected in the graph above.

These are but two data sets that foretell where media will be consumed in the future. If the gradual shift from traditional media to online.is indeed immutable, interactive shoppable video will likely thrive. No, it won’t replace many types of retail shopping for things like groceries or hardware store items. But high-volume wares such as shoes, cosmetics and popular consumer electronics will likely foment new and decentralized markets at their fingertips.

Like Pinduoduo seven years prior, OOOOO Entertainment is at the forefront of this anticipated shift in Western consumer buying habits. Wednesday’s announcement with QVC Italia SRL is a major step towards that goal, as the company’s buildout remains apace.

EVR Brands Taking Athleisure Up a Notch With Customization and Branding