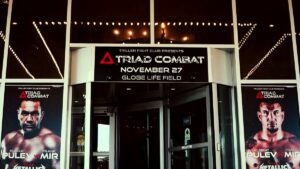 When Ryan Kavanaugh was a Hollywood producer, he acquired a reputation as a disruptor – he looked at the century-old studio system, with all of its hidebound ways and archaic decision-making, and asked, “Why?” Introducing data into the system, Ryan Kavanaugh was able to gauge a movie’s chances for success or failure based on more than just gut instinct. And he blazed the trail of turning movies into TV franchises because that’s where the data led him.

As co-owner of social network app Triller, along with Bobby Sarnevesht, Kavanaugh has spent the past year shaking up another ancient form of entertainment – boxing. A year ago, Triller launched the Triller Fight Club, a new way of putting on high-entertainment combat events combined with top-tier music acts. Triller events have paired legendary fighters from multiple disciplines, such as Mike Tyson, Vitor Belfort, and Evander Holyfield, with A-list musical acts, including Justin Bieber, Wiz Khalifa, and the Black Keys.

Triller Fight Club has been the perfect match for Triller, which allows users to record AI-edited music videos of themselves to share with friends, and for Kavanaugh, who has shown a knack for being able to look around the corner of the entertainment world.

However, Triller Fight Club is more than just a promotion. It is designed to give fight audiences a fresh and thrilling way to look at boxing from a cinematographer’s point of view, using the experience Kavanaugh gleaned from his years atop Hollywood, producing films ranging from “Frost/Nixon” to “Talladega Nights: The Ballad of Ricky Bobby.”

Instead of the fixed-high-angle camera view of boxing, a staple since the invention of television, Triller Fight Club bouts are shot from multiple angles with cinematic lighting – the same kind of lighting used on “The Fighter,” the 2010 Kavanaugh-produced boxing pic starring Mark Wahlberg and Christian Bale. The result: A compelling product that has resulted in sold-out arenas across the country and millions of pay-per-view and cable TV viewers.

To celebrate the one-year anniversary of Triller Fight Club, Ryan Kavanaugh innovated again: On Saturday, at Globe Life Field in Arlington, Texas, fans in the stands and watching at home on pay-per-view witnessed the debut of Triad Combat – a three-sided ring designed to level the playing field between boxers and mixed martial arts fighters.

Fans saw the fighters step into a triangle-shaped ring. Rounds were only two minutes long to speed up the action. But the real catalyst for fight action came from the design of the Triad itself.

The corners of the Triad are deeper than those in a four-sided ring and easier to get trapped in. Corners are where boxers get punished and where much of the crowd-pleasing action of a fight happens. With only three sides, the Triller Triad is mostly corner, which means more action for the fans. And it’s good news and bad news for the fighters.

Before the fights, Kavanaugh said, the fighters “will be in the corners either kicking ass or getting their asses kicked.”

In Saturday night’s main event, two-time Bulgarian heavyweight boxing world title challenger Kubrat Pulev pummeled two-time UFC heavyweight world champion Frank Mir in the first round with a fusillade of punches until he landed a strong left that left Mir unsteady and caught in a corner. The referee stepped in and called the fight for Pulev. of their Triad Combat Rules fight on Saturday night.

As viewers have learned over the past year, Triller Fight Club events are more than just combat sports. They feature top-tier musical acts between the bouts. The inaugural Triad Combat was no exception: Thrash-metal icons Metallica rocked the stadium with a full-length concert spread over three sets.

The Grammy-nominated band, which was inducted into the Rock and Roll Hall of Fame in 2009, opened its 16-song setlist with “Fuel,” closed with “Seek and Destroy” and included “Master of Puppets” and the iconic “Enter Sandman,” known as one of rock’s greatest anthems.

Asked to evaluate the success of the inaugural Triad Combat, Ryan Kavanaugh said, “11 out of 10.”

Kavanaugh told Reuters that Triad Combat is meant to grab younger viewers who see the traditional fight sports – boxing, MMA, and UFC – as out of step with the times.

“UFC is an old sport now,” Kavanaugh told Reuters. “The kids aren’t watching it. The UFC isn’t giving the 18-to-27-year-olds what they want to see. So, we’re hopefully bringing something forward that they do want to see.

Ryan Kavanaugh told the Dallas Observer that Triad Combat, “incorporates everything we learned. The first is that it needs to be faster, like a video game.”

Fighters used new equipment that draw on each of the combat sports. The boxing globes have finger openings so fighters can grapple and hold.

“The boxing guys have a competitive advantage, but the MMA guys have an advantage because their fingers are open,” Ryan Kavanaugh told the Dallas Observer. “There are no kicks, but you can hold and can do hammer and back fists. The holding changes the whole ball game.”

Viewers enjoyed a robust undercard prior to the main event.

UFC and Bellator star Matt Mitrione lost a unanimous decision to boxing veteran Alexander Flores, despite knocking down his opponent in the second round.

UFC veteran Mike Perry recovered from a knockdown from Michael Seals and took a split decision.

In the past year, Triller fight Club has sold over 3 million pay-per-views, making it one of the top-selling combat sports and entertainment platforms.

In addition, the company stages the Verzuz rap battles between legends of the rap game, such as KRS-One, Big Daddy Kane, Swizz Beatz, Timbaland, and Ne-Yo.

In October, Triller sold out Brooklyn’s Barclays Center with a two-night extravaganza featuring up-and-coming local fighters, a concert, and a Verzuz rap battle.

Resultant Expands Into Texas With Acquisition of Teknion Data Solutions