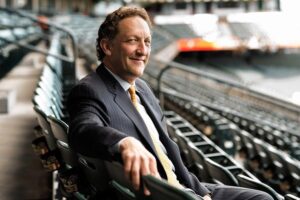 It’s been a year to remember for the San Francisco Giants. The storied franchise started the 2021 Major League Baseball season with 8,000 socially distanced fans inside Oracle Park and ended the campaign with more than 42,000 fans watching magical moments of playoff baseball. They fell short against the Los Angeles Dodgers on a controversial call that went against them, but one play didn’t define their season.

“There are thousands and thousands of calls during a season, and there are…hundreds of calls in any game, so I don’t think it’s right to dwell on that,” says Giants CEO Larry Baer.

The club is looking at the big picture. Baseball pundits predicted the Giants would win about 75 games in 2021. But the team reeled off a franchise-record 107 wins, leading the majors. They did so by staying true to their formula. They didn’t covet high-priced stars and rack up a huge payroll. The front office outsmarted other teams’ management by building a team centered around the right culture and fit. They got the most out of their veterans and signed underappreciated and overlooked players. They drafted the right players and trusted their farm system, a true credit to Baer and his management team. It was exciting to see the Giants front office exceed expectations.

“The fact that we got to 107 wins and the fact that [manager] Gabe Kapler, [President of Baseball Operations] Farhan Zaidi, [General Manager] Scott Harris, and the group were able to construct this blend was really beautiful to watch because it was almost like an orchestra working together,” adds the SF Giants CEO. “To see that come together doesn’t always happen in sports. It’s hard. I think the fans saw it and there was a lot of joy and we’ve very appreciative for it.”

San Francisco’s special season earned GM Farhan Zaidi Baseball America’s Executive of the Year honors. Zaidi put the roster together with $171.8 million in payroll, well below the $210 million luxury tax threshold, according to spotrac.com. As of 2021, Forbes lists the Giants as MLB’s fifth-highest valued team, at $3.175 billion, which was up 2% from 2020.

Larry Baer is no stranger to nine-figure deals and $200 million payrolls, but the Giants found such great success feeding off their farm system, it’s a stretch to expect them to spend tons of money every winter in free agency. With the sport in the middle of a lockout, deals aren’t getting done. In the past three offseasons under former General Manager Zaidi and current GM Harris — who helped shape the Chicago Cubs — the Giants handed out two multiyear deals and have yet to guarantee a player more than $20 million a year. It’s not likely they’ll ask ownership to dig deep in their pockets to break the bank for future additions once free agency resumes. However, they do need to replace recently retired catcher Buster Posey. Posey played a major role in the Giants winning three World Series titles and was the National League MVP in 2012.

“There’s obviously a lot more flexibility when we get to 2022, people know that,” Baer says. “We see more flexibility, but we just want to keep adding to the team smartly with respect to the players that are coming in and the ones in the minor leagues. I think nothing has changed in terms of our fierce desire to remain competitive, but we want to do it smartly.”

Not only did the team experience success on the field, it led the way during the coronavirus pandemic. The Giants worked with community partners, health experts, elected officials, and fans to safely return the ballpark to full capacity. The organization proved to be a shining bright spot in the Bay Area during difficult times. Through constant communication, they found ways to get fans back in the stands safely, efficiently, and effectively.

Despite the sting to the season’s end, the Giant’s 2021 run was historically and phenomenally successful. The Giants overcame adversity and overachieved. They won in one of the best division races in MLB history — and they set the tone for things to come. Only one team can win the final game of the season. For Giants CEO Larry Baer and company, that doesn’t diminish what they accomplished; it only rekindles the fire for future flames.

By Alan Hatfield Vinson & Elkins is expanding its global finance practice with...

By Exec Edge Editorial Staff All public companies have cash flow goals to...

Isidoro Quiroga is an international investor well-known in the business community for his managerial...