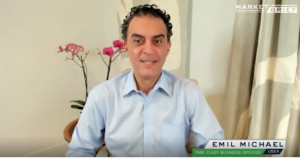 A shortage of drivers coupled with greater demand and soaring energy prices could mean pricier rides for ride-sharing consumers well into 2022, said Uber’s former chief business officer, Emil Michael. Michael appeared on Barron’s MarketBrief to weigh in on the future of ride-sharing.

“The demand is still pent up, and I think prices will stay high for a while,” said Emil Michael, who spent nearly four years at Uber. “Drivers are not going to go out onto the road if gas prices get to $5 a gallon if that driver doesn’t think they’ll be able to make up the difference by driving. That driver might pick something else to do.”

Uber’s Q3 2021 earnings revealed revenue is up 72% year-over-year, but the ride-sharing giant continues to struggle with supply and demand disparities.

“There’s a lot of crosscurrents, plus or minuses. And that’s why you see Uber’s stock price where it was at IPO or where it was a week ago or even a few months ago,” Emil Michael said. “No one knows how to predict how long-term some of these shifts are going to be.”

The average price of gas per gallon in America is currently $3.42, according to Barron’s. A year ago, a gallon of gas was hovering around $2.11 per gallon. Oil prices have jumped to their highest levels since 2014. The rising cost of fuel has become an ongoing battle for Uber and Lyft drivers.

“If it gets worse, the Saudis and OPEC have said they have no intention of increasing fuel production to lower prices. So we’ve slowed down in the U.S. on some of our gas production, which came from fracking and some of these initiatives from the current administration. It’s going to be unpredictable, but as gas prices go up, you’re going to continue to lose drivers.”

Emil Michael also pointed out that both new- and used-car prices are soaring, fueled by the demand for used cars. In the U.S., according to Kelley Blue Book, the price for used cars is up 12.19% from around this time last year.

“If you’re an Uber driver and your expense is the depreciation on this car that you bought at a higher price because there was a lower supply of [them] and fuel prices are going up, with two forces working against you now, then you need to make more money on a ride before you actually get in the car,” Emil Michael said.

As costs for ride-sharing drivers continue to climb, Emil Michael says partnerships with electric vehicle companies could be on the horizon.

“There are consumers who are very climate-conscious who will be happy to pay more for a ride they feel is more green,” Emil Michael said. “But in the short term, it shouldn’t have that big of an effect on the overall revenue. Even after hearing about the 50,000-car partnership Tesla has with Uber, the volume it’s up against is actually 3 million drivers. When that percentage is half a million versus 3 million, then you’re talking about a potentially bigger impact.”

Uber Eats has also been profitable for the first time ever, as shown in its Q3 2021 earnings report.

“When it comes to food mobility and food delivery, there’s been an incredible growth spurt during COVID because people couldn’t leave home, or weren’t leaving home,” Emil Michael said. “I think you’ll see some normalization of that during winter and throughout the holiday season. People are going out for holidays and celebrating with their families and going to restaurants for office parties.”

Considering trends for next year, Emil Michael feels all eyes will be on the new ride-sharing and food-delivery patterns people formed during the pandemic. For example, DoorDash and Uber Eats have experienced an increase in sales per customer throughout the COVID-19 crisis.

“The thing to really look at is, ‘Will the habits we formed during COVID carry over to next year?’ And I think they will to a degree,” Emil Michael said. “It certainly won’t be with the growth it had before, but how many more people have a food delivery app on their phone now versus two years ago? So I think that will continue to be one of the growth sectors in Uber’s business and with DoorDash. And you see it in China where Meituan is a $200 billion company, and they keep growing year over year at 30%.”